The Museum Of Bad Art (MOBA) is the world’s only museum dedicated to the collection, preservation, exhibition and celebration of bad art in all its forms.

THE Church of Scientology last night denied the Sydney man who was allegedly stabbed to death by his psychotic daughter after refusing her psychiatric drugs was a top recruiter for the church.

A man with the same name as the dead father is listed on the Church of Scientology’s “Honour Roll” in the 2002 Impact magazine which glorifies members worldwide for their efforts in “signing more than 20 members to the church” or for donating $US20,000 ($23,200) or more.

The man’s daughter, 25, faced Bankstown Local Court yesterday charged with fatally stabbing her 53-year-old father and sister at their Revesby home last Thursday. She is also charged with stabbing her mother, 52.

The girl’s parents refused her psychiatric treatment because of their Scientology beliefs, the court heard.

The man is also named on a website, stop-wise.biz, set up by a former Scientologist as a warning to would-be church recruits that the World Institute of Scientology Enterprises, known as WISE, is a recruitment vehicle for Scientology.

The latest Ecos magazine, published by CSIRO, examines the scientific debate that followed the release of the 2007 report of the IPCC (Intergovernmental Panel on Climate Change).

The report indicated that, by the end of the 21st century, sea levels could rise higher than previously predicted due to accelerated melting of polar ice sheets, highlighting a critical gap in our understanding of how polar ice sheets will respond to global warming.

Other stories in Ecos 137 include:

* Men of the trees: A volunteer organisation in Western Australia is helping farmers and others put 600,000 trees a year back into the landscape. Men of the Trees was inspired by Richard St Barbe Baker, an early 20th century environmentalist whose legacy lives on today.

* Indonesian marine reserve declared off West Papua: Indonesia has established a network of seven protected area off West Papua, which harbour some of the world’s most biologically diverse coral reefs, mangrove forests and other coastal ecosystems.

ECOS MAGAZINE – Issue 137 is available at major national newsagents or online at: www.publish.csiro.au/ecos

In this presentation, Dr John Banks will draw from his recent research with Auran Games on their forthcoming massively multiplayer online game, Fury (http://www.unleashthefury.com) to discuss user co-creation relationships as emerging social-network markets. John will consider how the choices that participants make in negotiating these relationships can be understood as emerging competencies for navigating the opportunities, risks and uncertainties associated with these networks. He will argue that far from being duped or exploited, users are often quite canny and knowledgeable participants in the making of these relationships.

About the speaker Dr John Banks is a Postdoctoral Research Fellow in the Federation Fellowship program, ARC Centre of Excellence for Creative Industries and Innovation, Queensland University of Technology. His research interests focus on the interface between media corporations and consumer co-creators in participatory culture networks. From 2000-2005 John worked in the video games industry (Auran Games) as an online community manager, facilitating the development of user-led content creation networks within the context of game development projects; he has published widely on research grounded in this industry background. John’s current research continues to work at the interface of game developers and gamers as they negotiate these emerging co-creation relations. He is currently collaborating with Auran on the propagation of social networks around their forthcoming, MMOG Fury.

For the past twelve years, Japanese band Envy have become one of the dominate forces in the independent hardcore scene in their home land. They create an incredibly intense fusion of emotive ballads with ferocious teeth gritting screaming hardcore.

Envy are due to head to Australia to play a series of gigs in July. 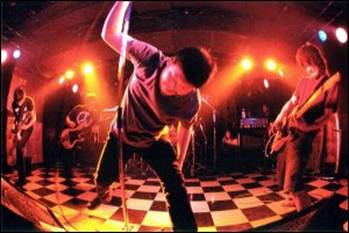 Combining speedy guitars, loud pounding bombastic drums, heavy Japanese screams, and pummeling fretless bass lines, their sound is a frantic and haphazard style of hardcore. However their songs are far from sloppy, and always have a lot going on, creating a layered effect.

The band also knows when to reel in the aggression, often segueing into a delicate section, giving their listener a break and nicely offsetting and defining the power of their volume.

Envy have released several albums over the years, to great acclaim, and have consistently toured the world, including being invited to play at the All Tomorrow’s Festival in the UK, and Fuji Rock in Japan.

For more information go to :