‘PopTarts’ – a Sydney-based collective of hundreds of independent original female pop music artists – is celebrating its sixth birthday with a showcase of six of the best ‘Tarts acts at The Basement nightclub on July 18/07.

‘PopTarts 6’ will feature performances from PopTarts’ founder and local music artist Amanda Easton as well as Robyn Loau, Evelyn Duprai and many more.

The birthday event will celebrate six years of PopTarts which, since July 2001, has included more than 500 local and touring artists at almost 300 regular showcase nights at Annandale’s Empire Hotel. Other PopTarts events have included ‘Tarts on Tour’ interstate shows and ‘Tarts for Timor’ charity gigs.

While Pop Idols fight it out on our television sets, these fully-financed artists are also using PopTarts to follow a more independent path to pop success and to share career opportunities and support.

In an era where live music struggles to keep its foothold in Sydney, the regular weekly Inner-West PopTarts events have been a welcome support to the local music community. 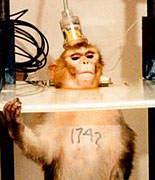 This is a follow up reminder that the ANZCCART vivisectors conference is coming to Melbourne from July 10-12, and Animal Liberation Victoria will be there sending a clear message that these apologists for animal experiments are NOT welcome. On the surface the conference is concerned with ‘humane’ science and reducing the number of animal in experiments. But there is no such things as humane vivisection, just as there is no such thing as ‘humane child abuse’ or ‘humane domestic abuse’. In reality this conference is a greenwash to hide the fact that, despite the existence of ANZCCART and Codes of Practice which call for the reduction in the numbers of animals used, statistics consistently show that animal experiments in Australia are increasing.

Animal Liberation Victoria is a voice in opposition to vivisection. We will be at the conference to tell those animal abusers what we think of them, their practice and their futile experiments. Plans are underway and we are looking for a support crew to help with a range of demonstrations, media stunts, rallies and marches. This is your chance to contribute to the AR movement as well as a chance to meet activists from other States. The conference will be held from July 10-12 in Melbourne. For more information, please call ALV Anti-vivisection spokesperson, Dan Archer on 0404 051 223 or e-mail dan@alv.org.au.

If you’d like to help me cultivate an inflated sense of self-worth, then please ckick on the link below and look for the film “Plastic Bag” (I am BUSAAAT – my profile pic is a black square with a white dot – an attempt to appear as if like I take myself seriously). From there you can either watch my little film, or go back about your business in the knowledge that you have contributed to a non-cause.

The site is an Italian MTV affiliate. My well-considered empirical research suggests that there’s a snowball effect with the popularity of video on the site. So I’m sending the link out to you lot to help bump my numbers up a little, and seed my snowball.

I really like some of the work they publish, and so I’d like to make use of my time on the front page. Here’s the link:

It might have been shunted to the second page by the time you read this.

Here’s a fantastic film they published:

ps. if all else fails, here’s a direct link (I’m just not sure if going directly there will add to the number of views – most probably would):

A reporter and a photographer from Sydney’s Daily Telegraph are expected to be charged with trespass after they revealed flaws in the security systems at Sydney airport. The stories published last month demonstrated the ease with which the pair had been able to enter secure areas.