What makes films by women unique?

These two upcoming events organised by Women in Film and Television (Victoria):

After the successful launch of CologneOFF – Cologne Online Film Festival and the organisation of the first two editions in 2006 CologneOFF I – Identityscapes, CologneOFF II – Image vs Music

VideoChannel is preparing now edition III of CologneOFF to be launched in October 2007.

VideoChannel invites artists and directors for submitting animated films/videos telling a story in form of a cartoon or other forms of narratives by using the new digital technologies.

. Deadline: 1 August 2007 . The subject can be chosen freely. . The films/videos may originate from the years 2002-2007. . The duration max. 10 minutes, exceptions possible. . Max 3 films/videos can be submitted. . Productions using language and/or text other than English need English subtitles.

All entry details and the submission form can be found on netEX – networked experience http://www.nmartproject.net/netex/?p=23

Held on the last Wednesday night of every month at Horse Bazaar in Melbourne’s CBD.

OUTPOST is a mixture of open jam, featured performances and spontaneous workshop and runs much like other SHARE events over the world. http://shareoutpost.org/ As always, audio and video jammers are most welcome so, Bring your gear and have no fear..

*MONA (mona.net.au) is offering world’s richest prize for the production of panoramic content.*

The Mona Prize for panoramic content is an open digital art prize for the production of screen-based content that best uses Horse Bazaar’s unique panoramic projection system. The screens are custom-built for the environment and extend for nearly 20 metres around the bar. Casting aside the traditional 4:3 screen format, visual artists are asked to produce digital content at an 8:1 ratio. The Mona Prize aims to cultivate the appreciation and production of panoramic virtual décor. This is an acquisitional competition; winning pieces will become a part of the MONA art collection.** 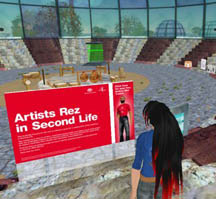 Application closing date: 27 July 2007 The Australia Council for the Arts is offering up to $20,000 for a collaborative artist residency in the virtual world of Second Life. The aim of the residency is to offer Australian artists and writers the opportunity to creatively and critically explore new interactive, virtual platforms.

The residency allows for a collaborative team of up to three people (including a writer, musician/sound artist and digital visual media practitioner) to develop inter-disciplinary artwork in Second Life. Applications will be accepted from teams who fulfil all the residency requirements, including having the necessary artform experience. Artists or writers who have professional experience in more than one of the required artform areas can include this as part of their submission.

Program purpose: The Second Life artist residency is an initiative of the Literature Board, Music Board and Inter-Arts Office of the Australia Council. The residency is in-world and requires artists and writers to explore the possibilities of inter-disciplinary literary, music/sound art and digital visual media practices.

The successful team will develop new artistic in-world practices and comment on the social and cultural layers that have evolved in Second Life.

Key requirements of the project are a clear strategy for harnessing both in-world and real life audiences and developing public exhibition opportunities for the artwork in Australia.