…or “ladies that actually dress for dealing damage“:

Cheesecake has its place.

But I like pictures of women who look like they are legitimately bad-ass. Women that don’t fight in high heels. Women that clearly give a shit about the practicalities of getting in a lethal situation. Women who could most definitely kick my ass.

Melbourne b-boys, b-girls, freestylers, funkstylers, dancers and anyone keen to watch the local crews jam, freestyle, train and battle it out should head down to the free session kicking off at 2pm!

Presented by The Push in partnership with City of Melbourne and KO Crew, City Breaks, aims to bring together the diverse hip hop and breakdance community of Melbourne who are currently creating impromptu performances in public spaces throughout the CBD.

The project aims to provide a safe and legal space for dancers to jam, collaborate, train and hang out!

The Push is a Victorian non-profit music organisation which runs a range of all ages, drug, alcohol and smoke-free events for young people to engage in the music and arts industries. 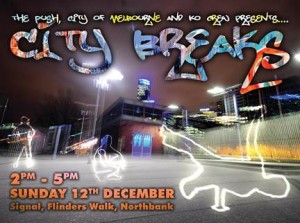 The NCPIC Short Film Competition gives young people aged between the ages of 16 and 25 years the opportunity to showcase their creative talent and express their thoughts and ideas about cannabis. This year the competition will focus on cannabis and its impact upon young people and their educational achievements.

The film can be in any style or genre (i.e. drama, comedy, documentary, science-fiction, etc.), but must creatively explore the issues associated with the use of cannabis and its impact upon educational achievement.

Editor’s note: hmmm not sure if NCPIC understand people enjoy weed. 🙂 Hopefully this can help inform the debate AND legalise marijuana. GG.

CSIRO has developed computer software that aims to encourage children to be more active when playing computer games.

Designed as an add-on to popular computer games that do not ordinarily encourage physical activity, it works by exploiting the children’s desire to win.

Through the Preventative Health Flagship, CSIRO experts in information and communication technologies (ICT) took a game that is usually played sitting down and devised a way for them to earn extra points if they jump up and down.

Dr Shlomo Berkovsky and his team developed the concept using the open source game Neverball, where players have a certain amount of time to guide a ball through a maze, and shortened the time.

“The only way an average player can complete the maze and go on to the next level of the game is by getting up and jumping around. Every jump earns a second of game time,” Dr Berkovsky said.

Modified and unmodified versions of the game were tested on 270 primary school children in Hobart, Tasmania. Those playing the modified game jumped an average of 257 times in the 20 minutes they spent playing the game.

“The children enjoyed playing the modified game as much if not more than the unmodified version and their parents were particularly pleased with how much exercise they seemed to be getting,” he said.

CSIRO’s approach can be applied to any game where there’s a parameter that can be measured, like time, and which it makes sense to reward, in the context of the game.

The work recently won the research and development (R&D) category of the 2010 Tasmanian iAwards, sponsored by the Australian Information Industry Association.