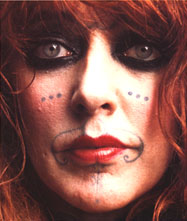 This is probably one of the world’s most ill prepared obituaries. It would take more considered time than I have to write about Vali Myers and do her justice. Perhaps in time and with the help of her many friends I will put together something that would qualify as worthy. Although, Vali would probably have disliked the sentiment attached to it.

Vali simply hated sentiment, and although her friends will always recall the scolding they received at any mention of love, or sickly show of emotion, she herself was perhaps the most passionate person you could ever meet. “I make love with my friends”, she said… “my beloved Rudi my late husband was after all my best friend”.

Vali couldn’t stand bullshit, and surrounded herself with those who agreed. She adored gypsies and Jews and poets and trouble-makers. She was delighted I hung with anarchists and introduced me as having made friends with the ‘right people’ in Melbourne.

Vali was born August 1, 1930 in Box Hill. She always put people’s demeanour (especially Melbourne folk) – down to the weather, which made them (in her view) more genuine, bright and cultured. If you thought yourself grand or were an ‘arty asshole’ forget it, she didn’t have the time of day for you. She could name-drop like there was no tomorrow too, but instead of recalling famous names to try and impress, she would say ‘so-and-so’ “that asshole, couldn’t stand ’em love”. And, she had a way of saying the word ‘schmuck’ that described it all!

Vali remembered those who were kind and nice, those who could think and fight for themselves, and those who could recognise true talent. She didn’t give a toss if you were ‘arty’ or rich or famous. She’d give you one of her looks and say ‘huh, arty’ what does that mean love?’ So there you have it, Vali could cut to the chase quick with people and she had an uncanny way of telling if you were cool, and could be trusted.

Towards the end of her life Vali was quite adamant that she had had a good run: and she could with most things – even death – go with the flow. No one was allowed to openly mourn her impending death, she would either give you the look, or say the words “coolit”. And no one could string two words together like that in a way which would raise visible goosebumps even on a elephant’s skin.

It wasn’t that Vali didn’t care about dying, but she simply accepted it. She saw death as natural – a part of the cycle of life – if she was scared (and I doubt she was) she never showed it. I doubt she believed in heaven nor hell, that would be far too simplistic for a woman who saw reality as “dreams within dreams”.

Her own work, which reveals countless layers of excruciating detail would support this claim. She was deeper than words can describe, she redefined spirit-ual work, and her rhythm for line-work is I believe unrivalled in the art world.

In the last few weeks before her death, Vali was most concerned about ensuring her works found a good and permanent home. She also wanted to ensure her remarkable life (to the end) was properly documented by those she respected and called ‘solid’. She also wanted to meet David Gulpilil. Vali said of David he was the only man in the last ten years she found sexy. And if Vali said something, she meant it!

We watched several Koori movies together including, ‘The Last Wave’, ‘Rabbit Proof Fence’ and ‘Walkabout’. I joked that she wasn’t to get over-excited seeing David Gulpilil’s butt in the ‘Last Wave’ (we both hadn’t seen his butt for some 25years :)! Instead of scolding me: she just gave me one of those ‘you’re such a dag’ looks and smiled. Vali allowed me to be me, that’s why I cherished her. I got away with some naughtiness with Vali, and she knew I cared the same way about humanity as she did.

I recall I couldn’t control my sorrow while watching ‘Rabbit Proof Fence’ and as the tears streamed down my face, Vali allowed me that space. It was after all in Vali’s heart too, tears shed for an entire race not a piddling individual.

Vali didn’t care much for people, she preferred the company of animals: and as she and I had this preference in common, it was the foundation for our friendship. Vali adored animals, anything – as long as it wasn’t “descended from a baboon” she told me.

Vali knew what being vulnerable meant, and it was evident that her beloved mother understood this also. As a little girl Vali would put on what would be considered way too much make-up, when her father refused to let her out, her mother would quickly leap to her defense and say, “leave her alone., she’s putting on her war-paint!” And it was true, Vali would prepare herself daily to go to war.

She fought against cruelty, injustice and stupidity. She couldn’t bear to see anyone trampled upon, and knew what it was like to be persecuted – simply for being different. She may have scared some people with her tattooed face but it was simply another technique Vali used to confront people. ‘Do you see beneath the facade, or is that the kind of bullshit you are into’?

I said to Vali she should have been a model, or could have been one. Oh oh,… as she haunched her shoulders I knew I said the wrong thing, but instead of a look & hiss, she said with quiet dignity “I never would have lowered myself love”.

Even at 72 she would have men & women fall for her. She was strikingly beautiful, with mounds of thick long red hair that had become dreaded, which only added to her appeal!

She had had her facial tattoos refreshed, and was as her friends appreciated — gorgeous! Vali also had a magickal aura and if you weren’t spellbound simply by her looks, you would be by her charm.

One of her favourite books documenting her look in Paris in the early years is “Love on the Left Bank” by famed photographer Ed van der Elsken (1925-90). She also had her favourite authors, and was extremely well read. She knew so much culture, and especially cherished her knowledge of Elizabethan history, which she said would rival anyone! She particularly loved Russian history and folklore and was forever bemused I didn’t know where my grandfather’s family had come from. She found it inconceivable that a girl of Russian Jewish descent didn’t know her roots. As she would say often, “don’t worry love we will go to Russia together and find out!”

She knew most of the famous and infamous, especially the writers, poets and musicians: but always had her favourites like Tennessee Williams who she recalled as a ‘nice, sweet man’. Tennessee excitedly told Vali at a bar one day in Italy that he had written about her in one of his plays ‘ Orpheus Descending’: the character Carol is based on Vali.

She had first met Tennessee in the small Italian coastal town of Positano. It use to be a haven for celebrities and renegades looking for some sanctuary. She couldn’t stand the show-offs with their fancy villas and cars. And although she very much liked Gore Vidal could never understand why he had such friggin’ poor taste as to live in a mansion. She said of Tennessee he was vulnerable, and although he never got over his unrequited love for a young Sicilian man, she accepted this as deep and sincere.

She wasn’t often forgiving of men, and despised some of the overt misogynists who use to hang with the beat poets. Although Vali wasn’t outwardly a feminist (she hated labels) she championed women, and always had more time for women than men. She was never one to resent a woman for her looks, as long as she had brains to accompany them.

As Vali always said of her beloved animals especially foxy the fox, fanny the donkey, manny the monkey or the host of others, especially the names of her beloved dogs self-inscribed i.e. tattooed on her feet and body “they’ll always be me with me love, you know”. And I do.

Audio and text A brief introduction to Vali Myers plus audio interview.

Vali would want to thank all the kind people who looked after her at Epworth Cancer Hospital, Richmond and also the unfaltering loyalty, kindness and friendship of Misiu. Vali has left an artistic legacy to the people of Australia. It is my sincere hope that as many people will be able to see this work in the future as possible.

PS. Vali, my grandfather’s family is from Gorky! I thought you’d like to know. 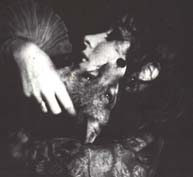 For more info on Vali Myers you can check out an interview and short article I created on her in 1997. Listen here.